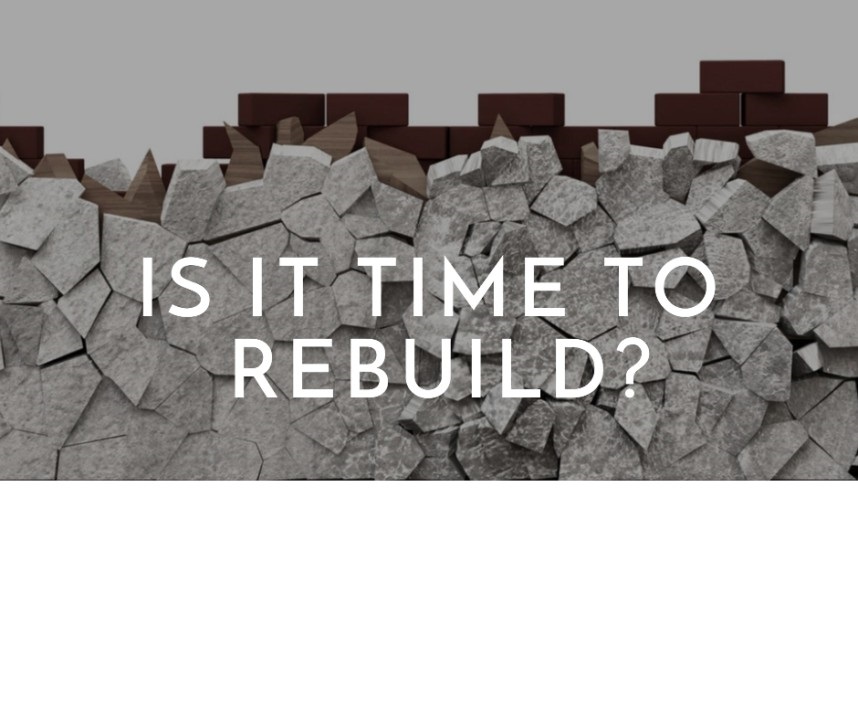 What's a REBUILD in your life?

How long will it take you to achieve your REBUILD? 52 days or 5 years?

Now that we’re well into 2021, are you still recovering from any of the significant and tumultuous events of 2020? What continues to be a weekly or even daily concern for you? What are you trying to rebuild in your life?

If you already know me, you’ve likely experienced my slightly “annoying habit” of asking questions. But I don’t mean to irritate people with my questions. I ask questions to create meaningful conversations in my personal and professional lives. Sometimes the questions are self-directed and get stuck in my head. Such was the case as I was sitting in church this past Sunday. We started a new ministry message series based on the book of Nehemiah entitled REBUILD.

Quick recap – Nehemiah an exiled Israelite of “professional high standing” who asks and gets permission from the king he serves in a foreign land to return to Jerusalem. Why? To rebuild the broken walls of the city for defense and protection. The book tells of Nehemiah’s leadership, dedication and divine involvement that allows the walls surrounding the city of Jerusalem to be repaired and in working order in only 52 days.

Now YOU may be asking “How big was Jerusalem in Nehemiah's time?”

According to experts cited in Wikipedia, the length of the wall would have been 2.4966 miles with the average height was 39.37 feet and the average thickness was 8.2 feet. 2 This was a massive wall and it included many watchtowers and several gates.

Why am I telling you about Nehemiah?

Because the Sunday morning message about Nehemiah and his 52 day wall project happened only 12 hours after I watched my beloved alma mater – the Georgia Institute of Technology – defeat Florida State in the finals of the ACC tournament. While this was their fourth ACC tournament championship in school history, it was their first since 1993!

I was attending college when this last championship happened. I started to believe that WINNING championships would be the norm of my adult life. Instead, I was a long suffering Tech alum and fan with almost three decades of disappointment. I wandered in an emotional wilderness of many early exits from the ACC tournament, underachieving teams, a few coaching changes and and very little NCAA success to cheer about during these last 28 years

What was behind the “instant” change for the Georgia Tech basketball team? What made the difference?

In 2016, five years ago, something happened that almost no one noticed. Georgia Tech hired a new basketball coach named Josh Pastner who did something crazy in today’s world of sports. Coach Pastner was honest about the length of time he proposed to REBUILD the program. He asked the fans to give him FIVE YEARS to make the NCAA tournament. He promised to work hard and try to improve the team’s performance each year. He was honest with anyone who would question his five year plan telling them “this is going to take some time.”

What did Coach Pastner do these past five years? Or more importantly, what DIDN’T he do?

First, he didn’t go land superstar recruits. He landed hard working guys who listened, learned and improved every year. He didn’t rely on the supernatural scorers. His teams became known for playing relentless defense and never giving up or giving in while never taking a day off.

And then Georgia Tech basketball under Coach Pastner became known for grinding to get every point, loose ball, rebound and extra possession. After five years of grinding – the team that he coached this season lost their first two games and sat in 10th place in the league only a few weeks ago. Then the team won nine games in a row, including two games at the ACC tournament to become the ACC champions for 2021. This meant an automatic bid to the NCAA tournament. When interviewed, Coach Pastner (doing what he always does) gave all the credit to his players, assistant coaches and fans for winning the 2021 ACC championship.

What do a sermon message and a collegiate basketball comeback story have to do with financial services?

I love sports because they illustrate lessons of everyday life in an exciting and entertaining way. I love my faith because it helps to guide and direct my life and my journey on this planet. These two stories clearly illustrate one very important point about your financial wellness. YOU HAVE TO KNOW WHERE YOU ARE AS YOU REBUILD TO KNOW WHAT YOUR NEXT STEPS WILL BE.

When it comes to your financial well-being and your present needs or future goals……what can happen for you in the next 52 days and what should you be doing for the next five years?

Do you need to focus more on defense or offense over the next few months?

Are your financial resources scattered and disorganized or do you have a game plan for the next season of your life?

Are you practicing and building discipline or are you lost in a financial wilderness?

You might believe you need a supernatural miracle like Nehemiah or a long term dogmatic approach like Coach Pastner, but I advise you to concentrate only on the next step. Remember, you can’t move forward if you don’t take a step. But you also need to be realistic about where you are in the moment.

Let’s take a page from both Nehemiah’s and Coach Pastner’s playbooks.

Yes, Nehemiah received divine help and guidance. But he also used his professional standing and a pragmatic approach to lead his countrymates to work on the REBUILD. Coach Pastner could have recruited the best individual players in the country, but he knew winning required teammates to practice together, become disciplined to dominate key aspects to strategically accomplish the REBUILD goal of earning an ACC Championship and an opportunity to play during the NCAA’s March Madness.

It would be my honor to help you during your REBUILD. Please contact me to set up a no obligation conversation. If you need to get organized with your finances, start by taking a financial snapshot of where you are today. A free worksheet to help you take your first step is yours for the asking.

Please comment on how you took the first step in your REBUILD.